Gata Kamsky, leader of the 54th Biel Chess Festival, defended his lead today with a draw against Nihal Sarin. He was thus able to keep Nihal at a distance, who would have had to go for the win today with the black pieces to still have a chance of winning the tournament. 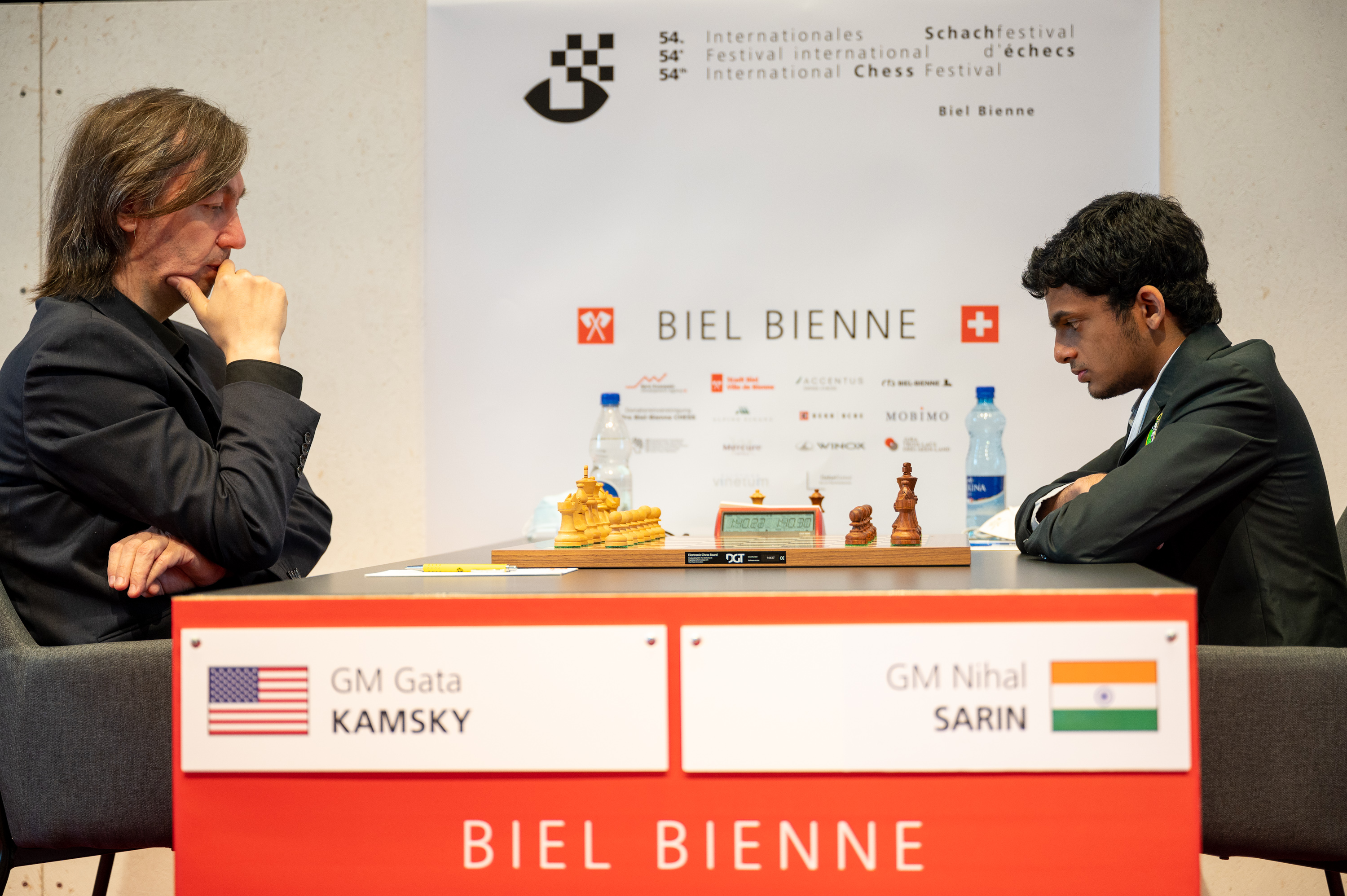 Kirill Alekseenko was the winner of the day. Although his working day once again lasted the longest and at times he was under quite a bit of time pressure, in the end he managed to get Boris Gelfand to give up. Thanks to this win Alekseenko now has 29½ points, just 1½ points behind Kamsky.

In the duel between the French champion and the Argentine number 1, Maxime Lagarde and Alan Pichot agreed on a draw. Lagarde, still well ranked at the beginning of the tournament, slips to 5th place with this result, Pichot remains penultimate.

Vincent Keymer celebrated his second victory in the classical games. He won with the black pieces against Noël Studer, who will definitely finish the tournament in last place after this defeat. Tomorrow Keymer will play Kamsky and the American will have to pay full attention to the game: not only does Keymer have the advantage of the white pieces, he is also - after Kamsky - the second-best player in the classic games! Alekseenko also has to play with black tomorrow - against Alan Pichot.

The top-class Master Tournament MTO keeps its promise, the decision has not yet been made: Leader Karthikeyan Murali only drew with white against Tamas Banusz today and has 6½ points before tomorrow's last round. Following with 6 points: Salem Saleh, who won against the young Indian star Praggnanandhaa with the black pieces today; Pavel Eljanov, with a very quick draw against Maksim Chigaev today; and Gukesh Dommaraju, who won the inner-Indian duel against Ganguly Surya Shekhar. Gukesh will face Karthikeyan in the top-of-the-table match tomorrow, while Salem Saleh will challenge Pavel Eljanov.

After today's defeat of India's Vaishali, the competition among the best women remains open: Vaishali remains on 4½ points, with Serbia's Jovana Eric and Laura Unuk from Slovenia catching up with her, followed by Russia's Dinara Dordzhieva with 4 points.

Amateur Tournament: A trio at the top

In the Amateur Tournament ATO, things remain open too: Due to the draw between the two leaders Wissam Pheng and Grégoire Tissier, 11-year-old Neeraj Harish was able to catch up thanks to his victory against Ahmed Saif today. Before the last round, the trio is in the lead with 7 points each. In the last round Wissam Pheng and Neeraj Harish play each other, Grégoire Tissier meets Moritz Valentin Collin.