In the Grandmaster Triathlon GMT, Lê Quang won easily over Naiditsch and keeps his first place. Esipenko, thanks to his victory with Black over Abdusattorov, moves up to second place. Gukesh-Kamsky and Keymer-Salem drew their games. With one round to go, Lê Quang is first with 34 points, Esipenko is second with 31 points, and Gukesh is third with 29½ points. But also Abdusattorov (26½ points) can also possibly still claim a place on the podium if he wins and Gukesh loses tomorrow.

DAQ: Ciarletta, the youngest one, now at the top!

Iris Ciarletta won against Yulia Avilova and takes the lead with 36 points. Zhuang Yongzhe only drew and is now second with 35 points, half a point ahead of Juliette Cornileau who won a very important game against the Margaux Moracchini. 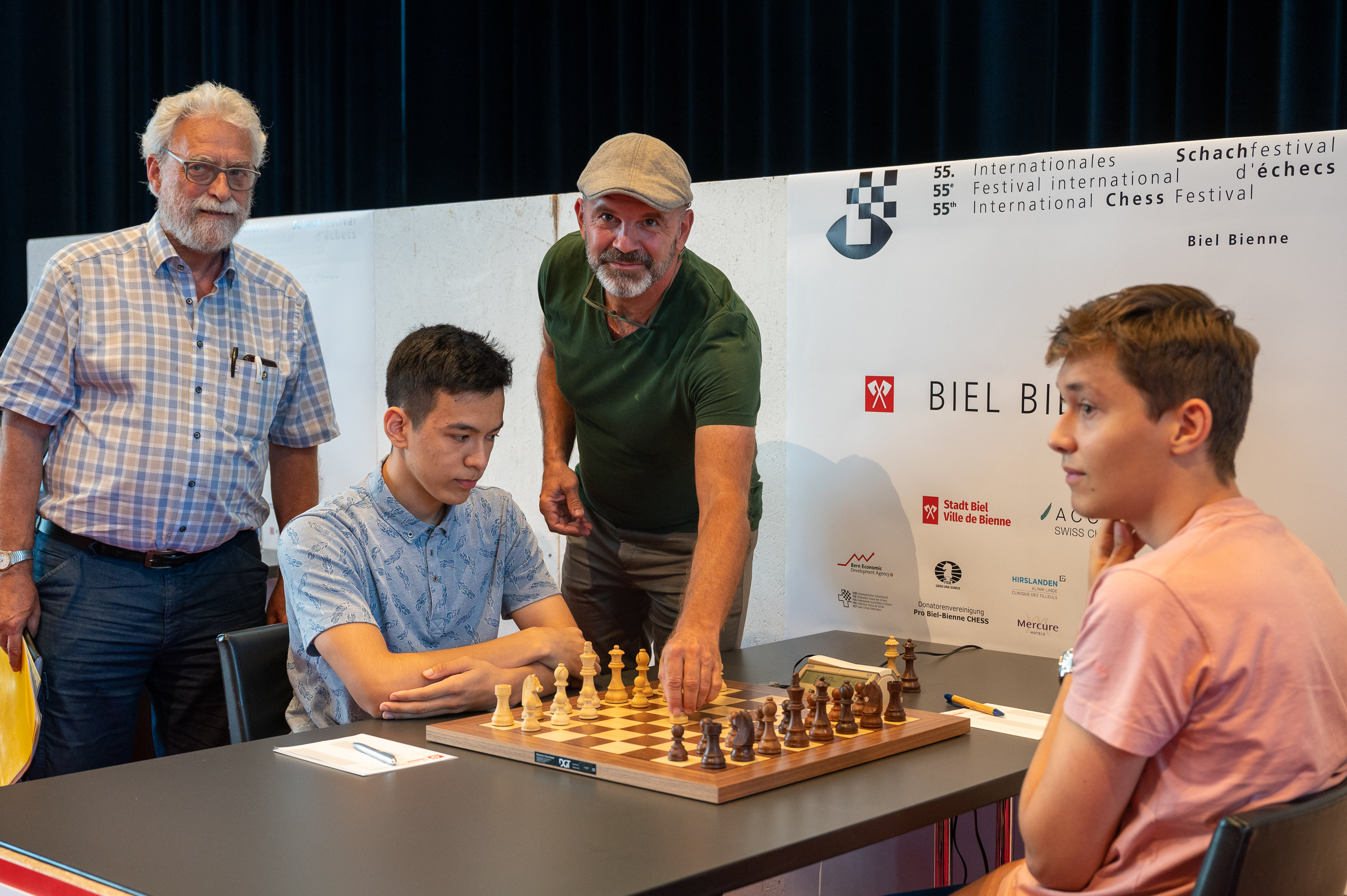 Pierre-André Weber, head of "Jugend+Sport Schweiz"made the first move at the top board.

The Swiss Youth Champions have been crowned!

As part of the Biel Chess Festival, the Swiss Youth Champions in the categories U16, U14, U12, U10 and U8 were crowned for the third time in a row. Over seven rounds, the country's 16 best players (U8: the eight best) competed on the 64-square board. The following players prevailed as the currently strongest in their respective age groups: 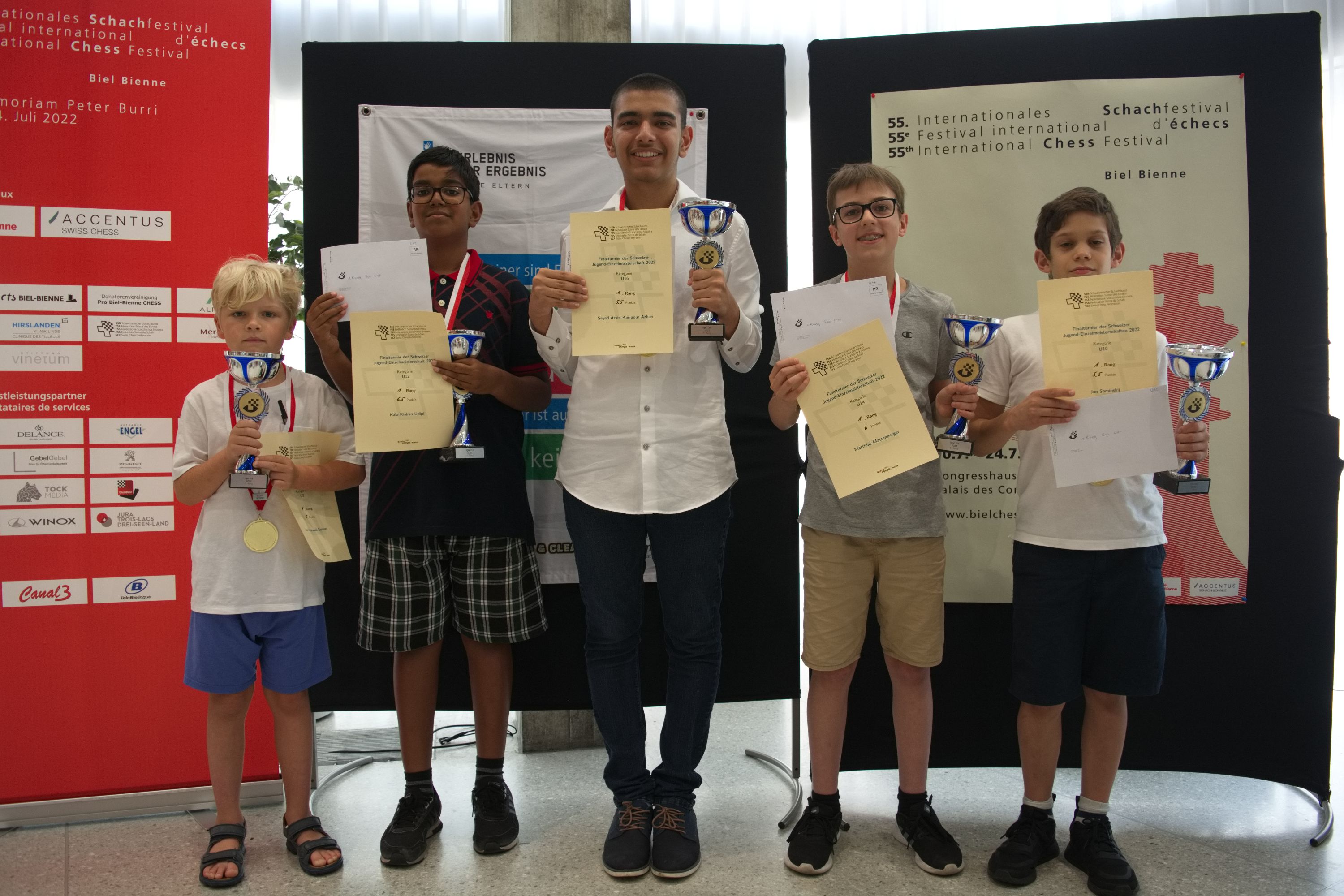 MTO: Alekseenko and Muradli in the lead

In the Master Tournament MTO, Vikash and Alekseenko have neutralised each other at table 1. Equal on first place with the Russian is thus now Mahammad Muradli of Azerbaijan, who won against Motylev. Alekseenko and Muradli are now in the lead with 6½ points. They are chased by a group of four players on 6 points, and ten players on 5½ points, some of whom have an excellent tie-break. Alekseenko, with White, will certainly try to win the tournament on his own by beating his direct rival tomorrow!

Ranking MTO before the final round:

ATO: Three players in the lead with 7 points

Ranking ATO before the final round:

Before tomorrow's final round, the final standings in all four multi-day tournaments are still open!

In the Grandmaster Triathlon, the first runner-up Esipenko will play tomorrow with the white pieces against the leader Lê Quang and can thus still win the tournament with a victory. Gukesh, on the other hand, will not be hoping for a win by the Russian – in that case he could still move up to second place with a win against Salem. In the other games, Kamsky will meet Abdusattorov and Naiditsch Keymer.

In the ladies' ACCENTUS Quadriathlon, too, there will be a showdown tomorrow between first and second! Iris Ciarletta has to defend her lead with White against Zhuang Yongzhe – in case of a draw, Juliette Cornileau could also come to the title with a win.

In the MTO tomorrow there will also be a direct duel between the two leaders with 6.5 points: Alekseenko vs. Muradli. In the ATO, too, there will be hot direct encounters between the contenders for the tournament title.

At 18:00, the winners of GMT, DAQ, MTO and ATO will be awarded their prizes in a ceremony in the foyer of the Biel Congress Centre, to which the public is cordially invited.

In the evening at 19:30 there will also be a very special competition on the programme: the "Brain Battle Chess vs. Poker", in which four chess grandmasters will compete against four of the best Swiss poker players in the two disciplines.